YANGSHUO - Shi Wai Tao Yuan
Li River - Yangshuo
Yulong River - Yangshuo
Li River, situated in Guilin City of Guangxi Zhuang Autonomous Region, is a bright pearl on the list of China's tourist attractions and it is the highlight of sightseeing tour in Guilin. The 83-km-long waterway from Guilin to Yangshuo is the masterpiece of Li River, decorated with rolling hills, steep cliffs, fantastic caves, leisurely boats and lined bamboos which is just like enjoying a melodious symphony. Hanyu vividly described the enchanting beauty of the Lijiang River in his poem: The River looks like a blue silk ribbon, and the mountains resemble emerald hairpins". Read More 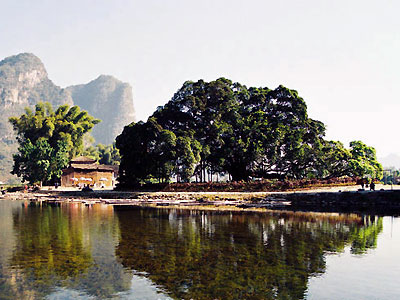 Aged Banyan Tree is located on the west bank of Jinbao River approximately 7.5km south of Yangshuo. It is said to have a history of nearly 1,400 years and has survived centuries of wind and rain. The Big Banyan Tree is now 17 meters high, 7.1 meters around the main trunk, and spans an area of 1000 square m 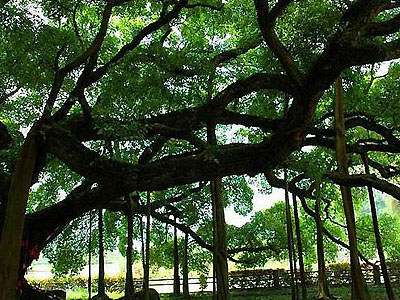 eters. As a major tourist attraction, the enormous Banyan is famous for its age and towering beauty.

Big Banyan Tree has survived from wind and rain over centuries since the Sui Dynasty (581-618), one of themain scenic attractions of Yangshuo Guilin. Although its stem is very old and its roots twist, its branches and leaves stretch out so lushly that the sunshine hardly penetrates its shadow. Sitting in its shadow on even the hottest day of the summer, you barely break out in a sweat. It is under this tree that the Liu Sanjie declared her admiration to her lover The A Niu. So this tree is one symbol of love as well, attracting many lovers come here to make wishes. As the old people told, for the couple, who make wishes here will get their dreams come ture, and for the single, who takes a photo with this tree will find his sweetheart soon. 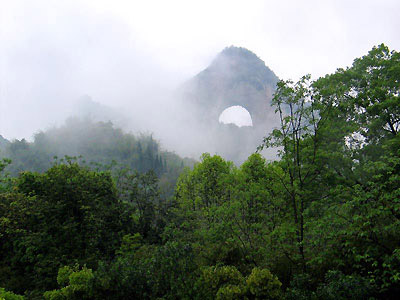 From Yangshuo, it is a short, pleasant drive to the aptly named Moon Hill, a great limestone peak with a naturally created moon-shaped cavern passing through just below its summit. Reaching the upper section of Moon Hill requires you to make a steep climb up a well-made path through groves of den 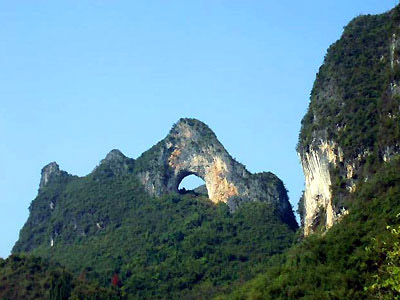 se bamboo. Once past the luxuriant vegetation, the path enters the great natural opening that distinguishes

this mountain from its neighbors. Moon Hill is not only an incredibly beautiful arch, it is certainly also one of the most interesting crags in the area. It comes as no surprise therefore that this was the first crag Todd Skinner equipped in 1990, inaugurating sport climbing in Yangshuo. The walk via the blue markers to the top of the arch and the panoramic viewpoint is highly recommended.

The landscape is stunning viewed from Moon Hill; the skyline is lined with peaks of almost equal height – resembling a jumble of giant rock traffic-cones pointing skywards. A patchwork of fields of diverse crops, in different stages of growth, enhances the landscape.

Scenic Spots
The scenic spot mainly consists of Lotus Pond, Swallow Lake, Swallow Cave, Dong Village, primitive tribe and Yuanming Villa. In China, Shangri-la is wonderland with happiness and ideal life style. Yangshuo Shangri-la is one of this place which near Guilin and Yangshuo County. It just needs about 15min to drive to Yangshuo County from the Shangri-la. It is just like a simple girl standing by the road. Walking into the Peach Blossom Village, the beautiful landscape pastoral scenery presents in front of you. Water waves on the Swallow Lake reflecting the willow lines along the lake bank.

Folk Ethnic Culture and Custom
There are living the ethnic groups. You can see many folk customs of them such as:

Dong Ethnic Song: A polyphonic type multi part chorus without accompany.
Zhuang Embroidered Ball: a mascot of Zhuang People which represents love. The embroidered balls are made by Zhuang girls.
Miao Embroidery: embroidery of Miao people. It is embroidered just by the memory of patterns of the people. For one tie, it needs a about 26 days or 1 mouth to finish.
Yao People Dance: as living in mountain, and there are lots of bamboos. The Yao people cut some bamboo as one of the tool for dancing and design lots of bamboo dances. 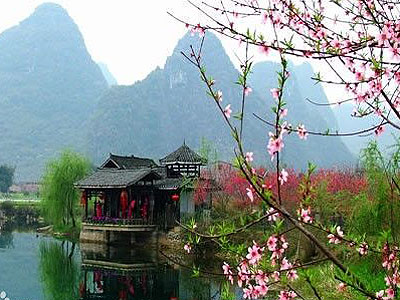 There are also other ethnic specialties and activities besides above waiting for your exportation.

Yuanming Villa
Yuanming Villa is a architecture of north Guilin style. It is a place introducing the life and poems of Tao Yuanming, a famous poet of eastern Jin Dynasty. It is a garden scenic spots with rich local characteristics. Pavilions and terraces connect each other and are surrounded by green trees and beautiful flowers. Groups of fish swim in the water.

Yulong Bridge was built in Yongle Period Ming Dynasty. It is a stone bridge with a length of 36 meters, a width of 4.2 meters and a height of 9 meters. Expressing a magnificent feeling, Yulong Bridge is in a simple style but featured minority characters.

Yulong Bridge is located in the Yulong River Scenic Area. Without any man-made attractions, this area is the largest natural landscape garden. Yulong River is one of the international natural heritages popular with people from all over the world.

► Legend of Yulong Bridge
It is said that a student who needed to take exam in the ancient capital of China, When he came to Yangshuo, he was blocked by a river which now is known as Yulong River. He prayed a bridge to go across this river for going ahead to the examination without any delay, and promised to build a bridge if he could join in the exam timely.. God was touched by his honesty, and them, a dragon appeared in the river to help this student. Finally, he got the No. 1 in the national examination and built up this bridge last. And according to this legend, this bridge got its name Yulong River (“Yulong” means meeting the dragon in Chinese).